To the uninitiated, there's not much going on in this series. To the microvariety collector, there's plenty.

Two obverses for 1953, as usual, and two reverses for 1955.  Hidden in the mid-sixties, in the last place you'd expect to find one, is one of the most difficult crossover mules to complete.  1964 sixpences occur occasionally with a 1965 obverse, and even scarcer are the 1965 sixpences with a 1964 obverse.  I have never found one of the latter.  To summarise...

In addition to all that, there's the strangely stubborn 1958, which seems to be much more difficult in top grade than it ought to be.

Obverse 1 was originally the scarcer of the two 1953 coins, as it was only found in the plastic sets, and 1.3 million of those were issued, compared to more than 70 million Obverse 2s. As circulation took its toll, and as more plastic sets were split, Obverse 1 gradually became commoner in high grade. It is now quite unusual to find an Uncirculated Obverse 2. Not Rare, by any means, but unusual.

Davies estimates the two reverses to be of similar abundance.  I concur. 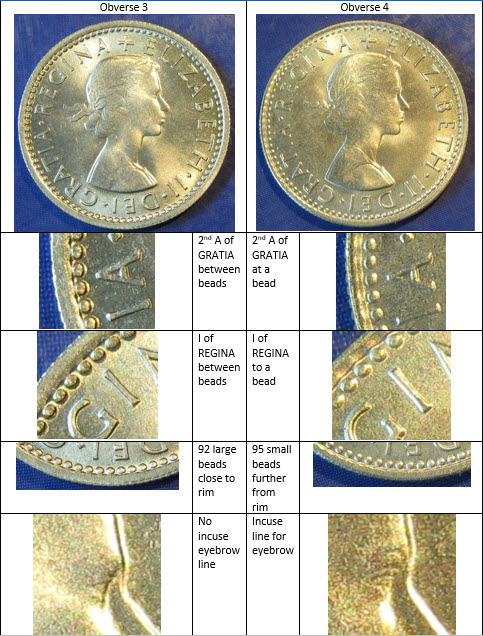