There are some scarce varieties of common Penny dates in this series that are still worth looking for in Circulated grades - so don't dismiss those piles of pennies - have a closer look at some of these...

The 1902 Low Tide penny is a well-known variety, but the tide changes around the turn of the century are not only found in 1902, and do not only affect the Penny.

The coins to be aware of that display tidal differences are:

The 1895 Penny has a low tide and a high tide variety, with the Low Tide being very much scarcer.  Freeman rates the Low Tide as R8, against the High Tide's R2.  The scarce type is easy to identify, as the P of PENNY is 2mm from the trident, instead of 1mm on the commoner type.  This seemingly small difference shows very clearly on the coin.

1897 is a fascinating year for tidal changes, as the sea level rises again, briefly, but each denomination needs to be treated quite separately.  On the Penny, the High Tide, at 4.15mm above the exergue line, is a genuinely difficult coin in any grade, rated as R9 against C2, which is a huge difference.  The halfpennies of 1897 are the other way around  the Low Tide is the scarcer type, but the difference is not to the same extent as the penny.  Freeman rates this pair as R2 versus C2  notable, but finding a Low Tide 1897 halfpenny is not quite as exciting as finding a High Tide 1897 penny would be.  In the case of the farthing, the low tide is once again the more difficult of the pair, R3 against N, according to Mr. Freeman.

Intriguingly, in 1898, the High Tide experiment is abandoned, and the Low Tide dies become standard again until the end of the reign in 1901.  This is where we meet the well-known Low Tide variants of the 1902 penny and halfpenny, as the reverse dies from Victoria are used for a short time in the first years issue of Edward VII pennies and halfpennies.

A 1902 Low Tide halfpenny is considerably more interesting than the equivalent Penny of the same year.  It seems that the variety was less well known, so less often rescued from circulation, and high grade examples are ever so tricky to find.

Although the Higher tide is adopted for the farthing immediately in 1902, the 1903 Farthing uses the Low Tide Victoria reverse dies for a single year, before reverting to High Tide the following year.

One final adjustment takes place during the changes to the Penny in 1908  the three scarcer types of 1908 penny use the old design, with the sea level at 4.40mm above the exergue line, while on the commoner Reverse D, the measurement rises to an all-time high of 4.75mm.  This configuration then continues right up until the major redesign of the penny reverse for Edward VIII in 1936.

As with most varieties, there are many other changes made to the designs and I have only selected Tide levels as a diagnostic feature. 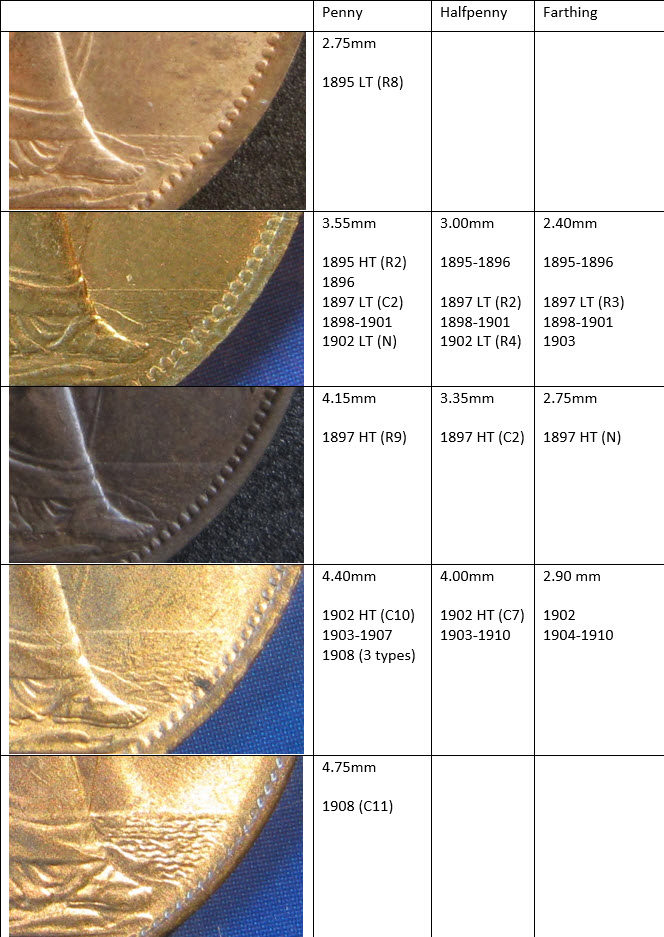 It always makes me raise an eyebrow when I come across a coin where I haven't got a more recent photo than the scans I used to do years ago.  Makes me suspect that a coin is scarcer than it's given credit for...

There are three obverses, one scarce, one downright rare, and one common, matched with two reverses making a total of 4 different types. Start by identifying which Obverse you have. If it's Obverse 1 or Obverse 1*, you won't need to move on the Reverse. If you have Obverse 2, then you need to decide whether it's matched with Reverse C, or Reverse D. The exciting variety to look for is Obverse 1*. Even worn examples will generally realise a three-figure sum...

A tiny number of 1909 pennies were issued with the later Reverse E, as is found on all 1910 pennies.  V.R.Court estimated 0.1%, but even that is an overestimation. Reverse E 1909 pennies are Extremely Rare.